Skip to content
Home »Statements»Drop the trumped-up charges against Boyette, Windel and others 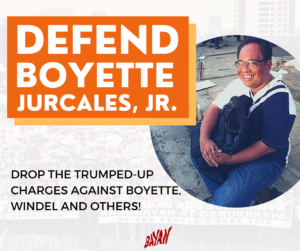 Activists are under attack through trumped-up charges that are meant to land them in jail. Last December 2020, the PNP in Tagum, Davao del Norte filed a trumped-up case of murder against 11 people from different parts of the Philippines, for a killing that happened in March 22, 2018.

Bayan’s Lutgardo “Boyette” Jurcales, Jr, like the others implicated, is being accused of a crime he did not commit, in a place he has never been to, in a case which he has only learned of now. The present case violates his right to due process as he was not accorded the right to be heard via a preliminary investigation. He only learned about the case when the warrant of arrest was issued.

We are confident that Boyette will be able to dispute the allegations of the false witness in the trumped-up case. What concerns us is that the warrant of arrest makes the accused vulnerable to more attacks against his name and his person. In the Cordillera region, a shoot-to-kill order was issued by the cordillera police chief against Boyette’s co-accused, Cordillera People’s Alliance chair Windel Bolinget. The arrest warrant is the legal cover for the potential commission of other human rights violations and irregularities such as the planting of firearms and explosives to justify additional non-bailable charges. Such was the experience of other activists such as Rey Casambre, Maoj Maga, Alexander Reyes and many others.

Who is Boyette Jurcales, Jr.?

Boyette, an engineer by training, is a social activist, environmentalist, internationalist and a staunch advocate of the poor and oppressed.

From 1989 to the present, Boyette has worked in various capacities for Bayan. He is currently the elected director for the Popular Struggles Commission which coordinates the different mass campaigns of BAYAN’s member organizations.

Boyette graduated with a Bachelor of Science in Industrial Engineering. While in College, he was involved in the SCAP (Student Catholic Action of the Philippines) and became Diocesan Chairperson and Representative to the National Council of the SCAP. Atty. Chito Gascon, Chairperson of the CHR, was then in the national leadership of the organization. During this time Boyette was involved in the formation of Concerned Students for Human Rights.

After his graduation in 1981, Boyette joined the Ecumenical Movement for Justice and Peace. In 1982, he represented the Philippines in the Pan Asian Assembly of the International Movement of Catholic Students (IMCS) in Sri Lanka where he was elected Asian Secretary and Head of the Asian Team of the IMCS. Right after the Pan Asian Assembly, he was one of the Asian delegates to the Inter Federal Assembly of the IMCS in Montreal, Canada.

After his stint in Hong Kong, Boyette went back to the Philippines. In 1986, he joined the Nationalist Alliance for Justice, Freedom and Democracy (NAJFD) and was assigned to its Research, Documentation, and Publication Department. Later, would be elected Deputy Secretary General of this organization.

At the height of the anti-US Bases Campaign, Boyette represented the NAJFD in the Steering Committee of the Campaign for a Sovereign Philippines (CSP) working against the extension of the RP-US Military Bases Agreement. Much later, he would represent the NAJFD in the broader Anti-Treaty Movement (ATM) and the short-lived ABAKADA.

As an official of the NAJFD, Boyette was also involved in the Nuclear Free Philippine Coalition and later, in the formation of the Network Opposed to Nuclear Power and Weapons (NO NUKES).

Subsequently, Boyette was chosen as one of the Philippine delegates to the Conference of the Nuclear Free and Independent Pacific (NFIP) in Aotearoa (New Zealand) and in the Pacific Conference in Suva, Fiji.

Meanwhile, while serving as Deputy Secretary General of the NAFJD, Boyette was also elected as one of the 3 Directors for the International Relations Commission of the Bagong Alyansang Makabayan (Bayan).

Boyette joined Bayan full-time in the second half of 1989 in various capacities. He was elected as Director of Bayan’s Popular Struggles Commission. Even as member of the National Secretariat of Bayan, he worked to form an alliance for environmental activists and advocates called EARTH which came out with a critique of the GATT-WTO.

Boyette is also an official of BALSA (Bayanihan Alay sa Sambayanan) which is the relief arm of Bayan. BALSA serves as coordinator of the relief missions of Bayan allied organizations. He is a founding member of AGHAM, a mass organization of scientists and technologists that would later be admitted as a member-organization of Bayan. He is also the coordinator of the International formation, Ban the Bases, which is composed of anti-bases groups in the US, Europe, and Asia-Pacific.

Boyette heads the department for organization of the Makabayan Coalition.

Working for the poor, marginalized and oppressed for most of his life, Boyette is an outstanding social activist, environmentalist and internationalist.#