Skip to content
Home »Statements»End red-tagging, Address the Roots of the Armed Conflict 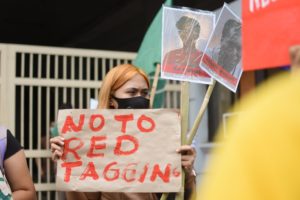 No to Red Tagging. [Photo from Bulatlat]

It is time to end red-tagging and instead address the roots of the armed conflict.

Red-tagging has become reckless and indiscriminate. It has included among its targets ordinary farmers, indigenous peoples and workers. Recently it has included lawyers, doctors, artists, church leaders and journalists. A lawyer and a doctor were killed in separate incidents after being subjected to red-tagging. Red-tagging now also includes academic institutions whose academic freedom is threatened by military intervention.

Yesterday, former justices of the Supreme Court sought the help of the SC against threats related to red-tagging and the petitioners against the anti-terror law.

Red-tagging has spawned a new extortion racket where the extortionists threaten victims that their names are on a list of alleged “communist-terrorists”, according to the PNP.

The red-tagging by State forces has spun out of control, targeting just about anyone that raises a critical voice against the regime or is somehow associated with schools and institutions that the regime disagrees with.

This witch-hunt has become so brazen, totally disregarding laws, professional standards and the basic right to due process.

Red-tagging is real. It endangers people. It has to stop. Now.

We call on the Philippine government to heed the 2008 recommendations of UN Rapporteur Philip Alston which remain relevant to this day.

“The Government should immediately direct all military officers to cease making public statements linking political or other civil society groups to those engaged in armed insurgencies. Any such characterizations belong solely within the power of the civilian authorities. They must be based on transparent criteria, and conform with the human rights provisions of the Constitution and relevant treaties.”