Skip to content
Home »Statements»Long Live Peoples Struggle Against Trumpism and US Imperialism! 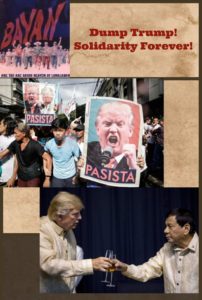 BAYAN (New Patriotic Alliance) stands with the democratic forces and all of the United States of America’s working people in condemning the continuing white supremacist attacks and threats inflicted by Donald Trump and his supporters. These assaults are not only the result of Trump’s refusal to concede defeat in the recent elections. The relentless fascist activities of the Trump regime are a perpetuation of right-wing protests being fueled by Trump himself since he came to power.

As a an alliance of anti-imperialist and anti-fascist mass organizations in the Philippines, BAYAN also stands with the peoples of South America, West Asia, North Africa and all peoples of the global South whose economies, political structures, food systems, cultural resources and ecologies have been plundered, corrupted and ravaged by US imperialism. The imperialist Trump regime has consistently dictated upon and reinforced the plunderous and murderous Duterte government in its fake war on drugs and so-called counterinsurgency program, which has dispossessed millions of Indigenous People, farmers and workers; imprisoned and murdered human rights defenders. Duterte’s killing machine, the Philippine National Police (PNP) and the Armed Forces of the Philippines, have been emboldened by Trump’s military financial aid, million-dollar arms sale, the US military and Israeli Defense Force (IDF) training and the occupation of US troops legitimized by fortified military “partnership” through the Visiting Forces Agreement (VFA, 1998), Enhanced Defense Cooperation Agreement (EDCA, 2014) and the Mutual Defense Treaty (MDT, 1951).

Our solidarity with the freedom and peace-loving citizens of the United States is built on an understanding of our own experience of Spanish colonialism and US imperialism. Through our national democratic struggle against US imperialism, we recognize and assert that “Trumpism” is only a symptom of US imperialism, which is none other than a global empire founded on the captivity of the peoples of Africa and the genocide of the Indigenous Peoples in a part of North America. The current right-wing assaults in the US are an extension of Washington’s perennial policy of destabilization in countries like Chile, Indonesia, Bolivia, Cuba, Honduras, Venezuela, Iran, Syria, Libya, etc, the US support for dictatorships in the Philippines, Brazil, Colombia, etc, the US war policy on Iraq, Afghanistan, Yemen and the former Yugoslavia; the US-Israeli Zionist occupation of Palestine and its relentless war against the peoples of the Arab region.

While BAYAN welcomes all efforts to defeat Trump through the vigilance of the American people, including the tactical move to impeach him on account of high crimes and misdemeanors, we strongly believe that the conditions which gave rise to “Trumpism” and US imperialism remain and will not cease to inflict imperialist attacks on a global scale. History shows that the US two-party system is a bourgeois political tool to undermine peoples struggles domestically and facilitate US imperialism globally. Our global anti-imperialist, anti-fascist unity as peoples in the neo-colonies, occupied territories and oppressed nations behooves us to decry and struggle to defeat the global imperialist system dominated by the US ruling elite, even beyond Trump.

Trump’s waning hold on the US imperialist state is a clear warning to the brutality of the US-Duterte regime as well as to all US-backed authoritarian governments on the people’s capacity to push back against tyranny. As we witness the coming defeat of a faction of US imperialism’s ruling elite, it is our duty to hold fast to the ongoing project of an international anti-imperialist united front. We have a world to win!